Conventional and cooled RFA are similar in that both cause the heat destruction of part of the nerve tissue by using a continuous electrical current to create a lesion which in turn, helps to reduce pain. However, they differ in the design of the probe which emanates heat and damages the neural tissue. The probe used in cooled RFA has a system of water running through the probe tip to keep the probe-tissue interface at a lower temperature. With such a design, cooled RFA, compared with conventional RFA, could cause an increased area of nerve destruction with less heat damage to surrounding tissues (Kapural et al., 2020).

Different from conventional and cooled RFA, the electrical current of pulsed RF is not continuous but occurs in short pulses (20-millisecond pulses every 500 milliseconds), which allows for heat dissipation between pulses and therefore creates an environment with a temperature not exceeding 42 °C (Ahadian, 2004). By keeping the tissue temperature below the neurodestructive threshold of 45 °C, it was originally believed that pulsed RFA is totally non-ablative to neural tissues. However, evidence suggests a probability that the very high electric fields produced by pulsed RFA could lead to the disruption of neuronal membranes and function (Cosman et al., 2005).

A number of systematic reviews and meta-analyses have been conducted with regard to using RF techniques for treating knee OA (Ajrawat et al., 2020; Chen, Mullen et al., 2020; Hong et al., 2019). In this OE Original, we summarize evidence from randomized controlled trials (RCTs) and carry out an up-to-date meta-analysis to address the following review questions: a) Are RF techniques, which degrade the nerve’s ability to conduct pain signal via delivering thermal energy, superior to other non-surgical treatments using a different mechanism in terms of efficacy (i.e., patient-reported pain and function outcomes) and safety for the treatment of knee OA? b) Are there differences in the efficacy and safety outcomes among different modes of RF, including conventional, cooled, and pulsed?

Eligible studies were RCTs which compared the efficacy and/or safety outcomes of one of the three radiofrequency techniques (i.e., conventional, cooled, and pulsed RF) with other non-surgical modalities among patients with knee OA. We only included studies published in English. We excluded studies that were conference abstracts or whose full-texts could not be accessed.

We adopted the Cochrane risk-of-bias tool and the GRADE approach to determine the risk of bias (RoB) and the quality of evidence for included RCTs, respectively.

The general information of the 15 included studies is presented in Table 1. Davis et al. (2018) and Davis et al. (2019) belonged to the same RCT but followed up patients at different points in time. The 15 RCTs were relatively small in terms of sample size.

There was a great variety in comparators. Choi et al. (2011) adopted sham procedure. Most of the remaining studies used intra-articular injection such as hyaluronic acid (HA), corticosteroid, platelet-rich plasma (PRP), ozone, or analgesics as the control group.

In terms of RoB (Figure 1), most included RCTs had a high RoB in blinding the participants. Additionally, around half of the studies failed to provide adequate information on the randomization and allocation processes as well as on whether the outcome assessors were blinded.

We meta-analyzed three patient-reported pain and function outcomes, including pain on a 0-100 normalized scale, the Western Ontario and McMaster Universities Arthritis Index (WOMAC), and the Oxford Knee Score (OKS). Adverse events and serious adverse events were summarized as well. In each outcome meta-analyzed, we also presented subgroup results based on the mode of RF, including conventional RFA, cooled RFA, and pulsed RF.

2.1 Pain on a normalized scale

Only two studies provided data on pain at 12 months post treatment (Figure 5). No significant difference was found in pain relief at 12 months after treatment between patients having RF and those receiving other non-surgical treatments (Figure 5). 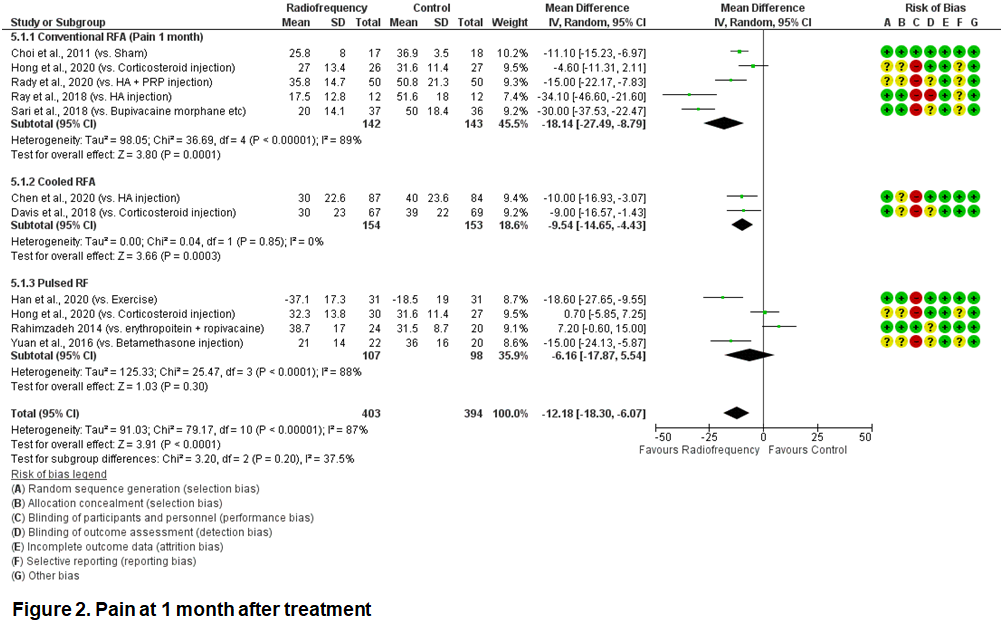 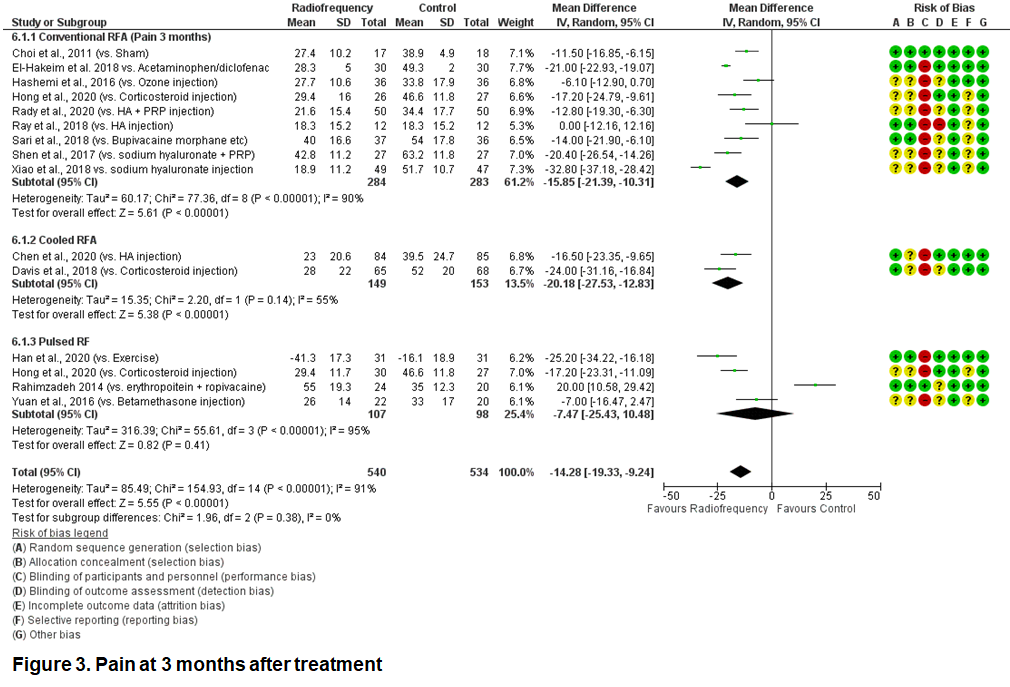 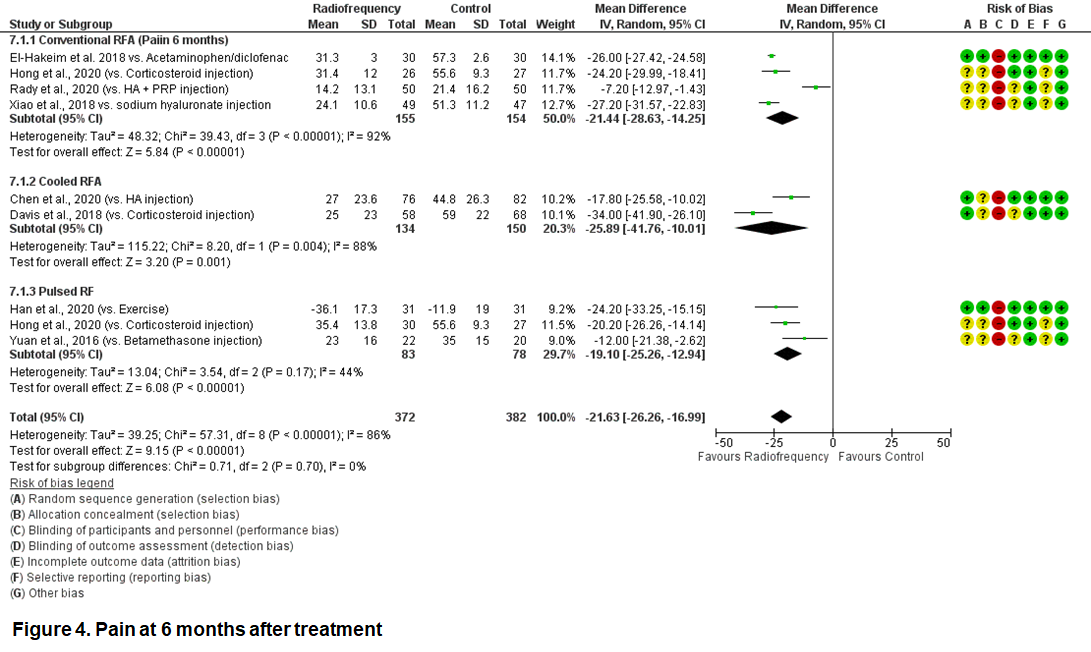 In terms of subgroup analysis based on the mode of RF, all RF treatments at all points in time, with the exception of conventional RFA at 1 month and pulsed RF at 3 months, significantly improved the WOMAC, as opposed to other non-surgical treatments (Figures 6, 7, and 8). 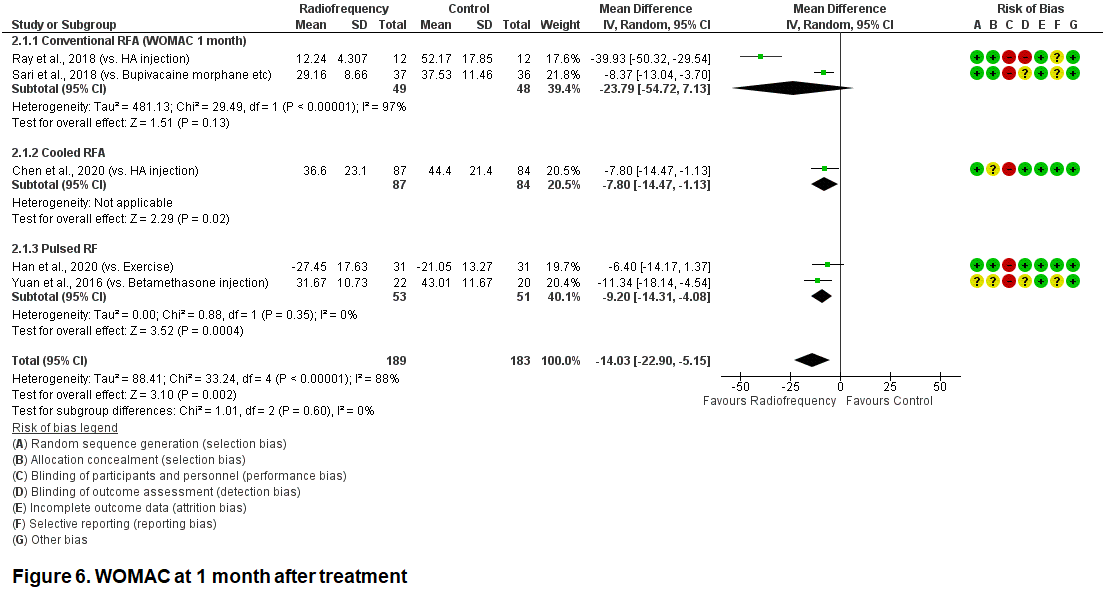 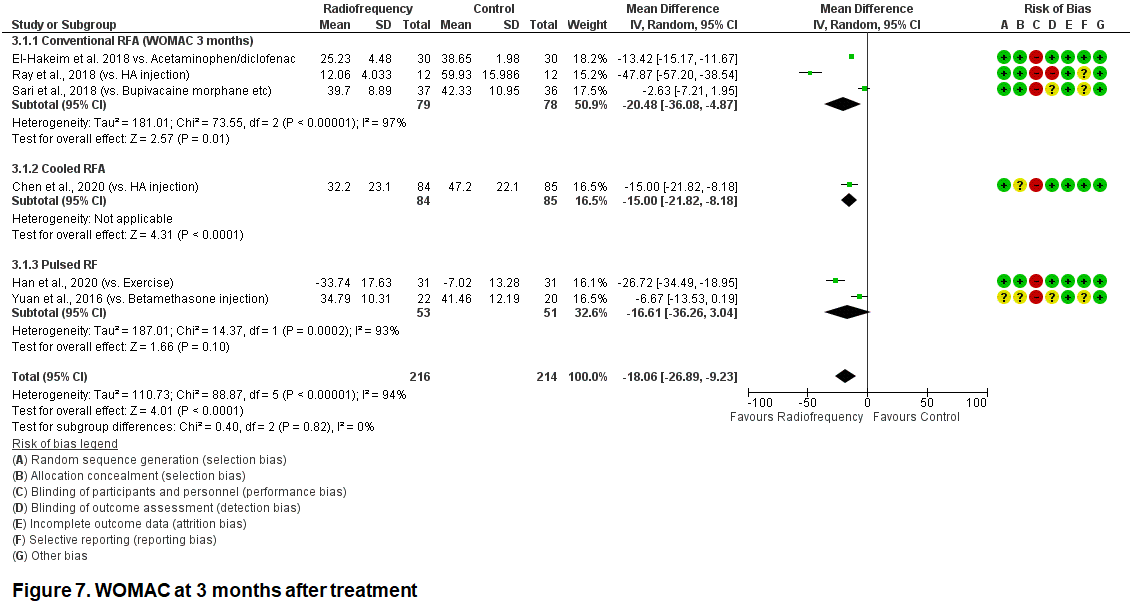 The OKS results from the subgroup analysis were mixed (Figures 9, 10, 11, and 12). For instance, conventional and cooled RFA significantly improved the OKS compared to control at 3 and 6 months post treatment (Figures 10 and 11), while no significance was found between conventional and cooled RFA vs. controls at 1 and 12 months after treatment (Figures 9 and 12). 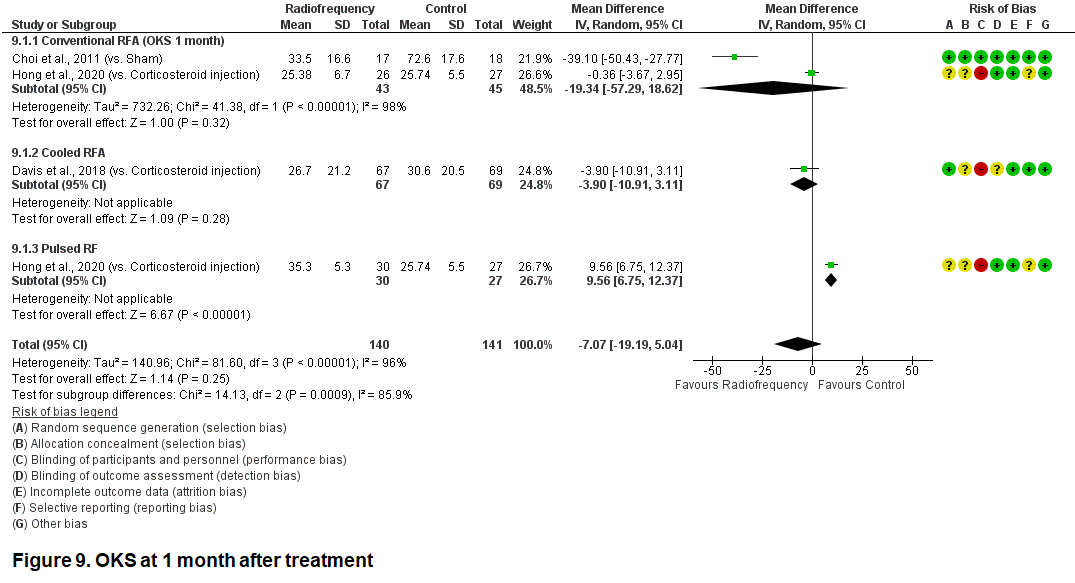 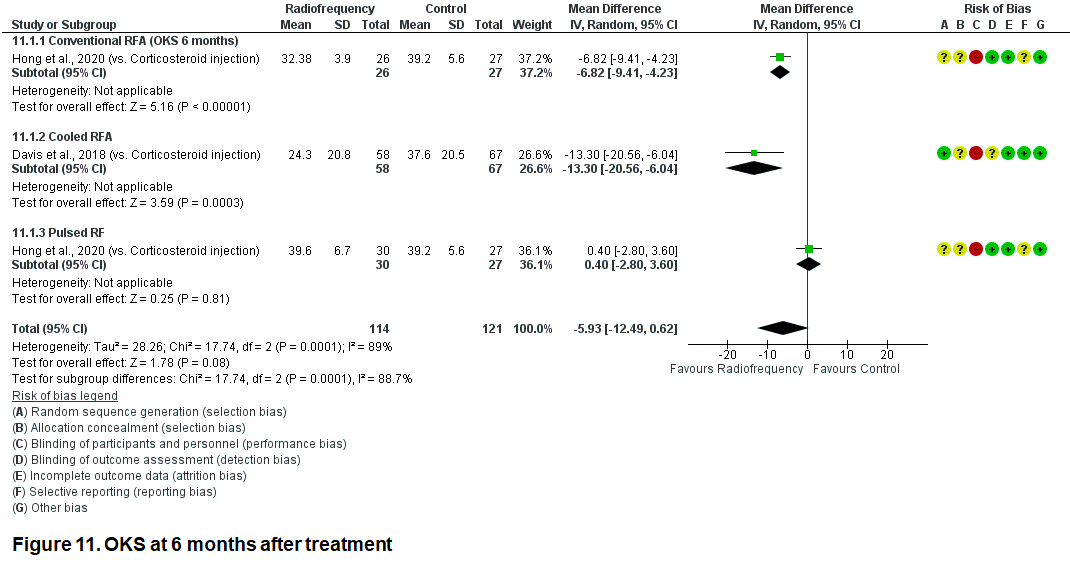 Several RCTs reported adverse events. Among them, Choi et al. (2011), Rahimzadeh et al. (2014), Sari et al. (2018), and Yuan et al. (2016) found no adverse events in the RF group or the control group. Rady et al. (2020) reported that in all 100 patients from the RF and control (i.e., intra-articular injection of hyaluronic acid and platelet-rich plasma) groups, mild knee swelling occurred three to five days after the procedure. The above studies were not included in our meta-analysis. 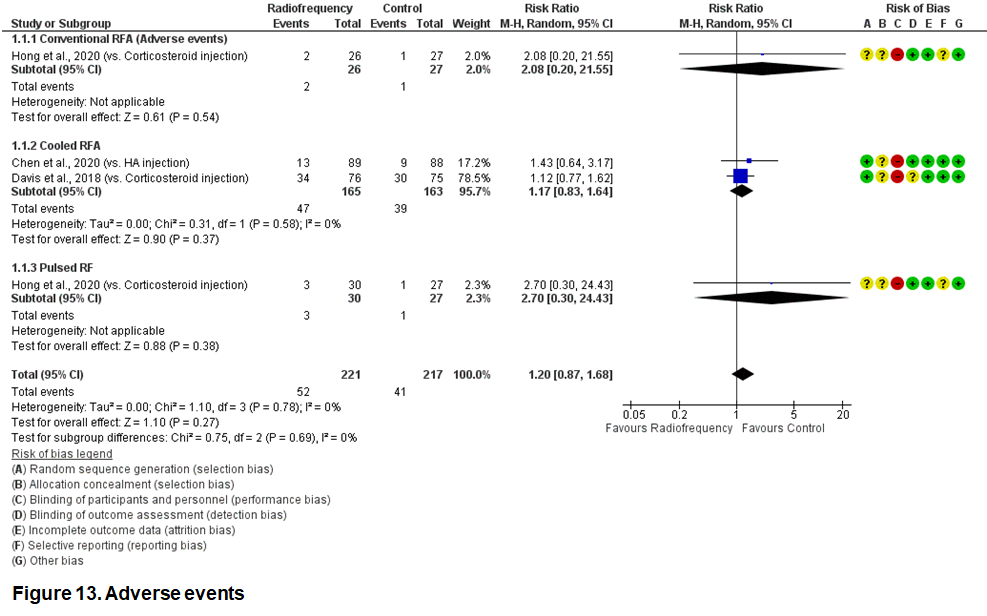 In this OE Original, we carried out an up-to-date meta-analysis to determine the efficacy and safety of radiofrequency (RF) techniques in the treatment of knee OA. We identified 15 RCTs comparing three modes of RF, including the conventional, cooled, and pulsed, with a variety of other non-surgical treatment modalities. We quantitatively synthesized patient-reported outcomes with regard to pain, the Western Ontario and McMaster Universities Arthritis Index (WOMAC) and the Oxford Knee Score (OKS). Adverse events were also synthesized. The summary of the meta-analysis results as well as the quality of evidence were presented in Table 2.

Most of the outcomes were short-term outcomes (< 12 months). Hunter et al. (2020) followed a subset of patients from the RCT conducted by Davis et al. (2018 and 2019) at 18 and 24 months after treatment. They found that conventional RFA provided sustained pain relief and function improvement through 24 months for knee OA patients without adverse events identified (Hunter et al., 2020). However, Hunter et al. (2020) only followed up the RF arm to 18 and 24 months and did not provide any data on the control group (i.e., Intra-articular corticosteroid injection). Therefore, the long-term treatment effect of conventional RFA relative to the control was still unknown. More data comparing the long-term effects between RF and other non-surgical treatments were required.

We conducted subgroup analyses for each outcome based on the mode of RF techniques (i.e., conventional RFA, cooled RFA, and pulsed RF) in order to determine if there was any difference in the efficacy and safety outcomes among different modes of RF. We found no significant differences according to the statistical test for subgroup difference in majority of the pain, WOMAC, and safety outcomes; yet in OKS, the subgroup differences existed with conventional and cooled RFA being more effective in improving OKS than pulsed RF. Even for pain at 1 and 3 months after treatment, with visual inspection, we could see that conventional and cooled RFA resulted in significant pain relief while pulsed RF did not. Our finding that conventional and cooled RFA might be superior to pulsed RF in terms of efficacy corroborated with the subgroup analysis results from a previous systematic review (Hong et al., 2019) and with some evidence directly from RCTs making head-to-head comparison between conventional RFA and pulsed RF in patients with knee OA (Hong et al., 2020; Mogahed et al., 2017). To substantiate the conclusion, more RCTs involving a head-to-head comparison between pulsed RF and conventional and/or cooled RFA were needed.

Using the GRADE approach, we rated the outcomes from low to very low quality of evidence (Table 2). Other than serious risk of bias, one of the main concerns was the existence of considerable inconsistency judged based on the I2 (Meta-Analysis: 1 Quick Tip That Helps You Trust the Overall Findings), which, as Guyatt et al. (2011) pointed out, quantifies “the proportion of the variation on point estimates due to among study differences”. In the present meta-analysis, I2 was very large in almost all the outcomes we synthesized. We conducted subgroup analysis based on the mode of RF aiming to find some explanations for the high heterogeneity. However, the high heterogeneity generally remained as the I2 was still very large after breaking down the synthesis by the mode of RF. There were numerous factors that might contribute to the heterogeneity other than RF mode, such as the differences between comparators, including sham procedure, the intra-articular injection of corticosteroid, hyaluronic acid (HA), sodium hyaluronate, platelet-rich plasma (PRP), ozone, or analgesics, and the use of oral analgesics, which we were not able to test upon.

A recent systematic review conducted by Ajrawat et al. (2020) on the same topic concluded that RF for knee OA could potentially improve pain and function with minimal complications, which was similar to our conclusion. However, Ajrawat et al. (2020) only presented a narrative evidence summary because the authors believed that a quantitative synthesis was inappropriate due to the high heterogeneity.  In conducting the present systematic review, we also fully recognized that high heterogeneity existed. However, we still decided to conduct the quantitative synthesis while at the same time recognizing it as one of the limitations of our meta-analysis because a meta-analysis on RF under such high heterogeneity would be still appropriate and meaningful if we ask the right review question. As the Cochrane handbook stated, “a meta-analysis may reasonably evaluate the average effect of a class of drugs by combining results from trials where each evaluates the effect of a different drug from the class” (Source). In the present meta-analysis, we asked a similar research question, which is whether the RF technique, which delivers thermal energy to the nerve tissues and degrades their abilities to conduct pain signals, is effective and safe, compared to other non-surgical treatments of other mechanisms.

The present up-to-date meta-analysis indicated that radiofrequency (RF) technique (including conventional, cooled, and pulsed), which delivers thermal energy to the nerve tissues and degrades their abilities to transmit pain signals, seem to be as safe as and superior to other non-surgical treatment modalities (e.g., the sham procedure, oral analgesics, and intra-articular injection of corticosteroid, hyaluronic acid, platelet-rich plasma, ozone, or analgesics) in terms of reducing pain and improving WOMAC within 12 months post treatment among patients with knee OA. Future RCTs need to adopt a high-quality methodological design and look at the long-term effects of radiofrequency techniques (> 12 months). Additionally, RCTs involving head-to-head comparison between pulsed RF and conventional and/or cooled RF ablation are also needed.

Rahimzadeh, P., et al. (2014). Investigation the efficacy of intra-articular prolotherapy with erythropoietin and dextrose and intra-articular pulsed radiofrequency on pain level reduction and range of motion improvement in primary osteoarthritis of knee. Journal of research in medical sciences, 19(8), 696-702.