We searched OE MIND, Ovid Medline, Ovid Embase, and Cochrane Controlled Register of Trials (CENTRAL) from inception to December 31st, 2020 for RCTs published in English and comparing the efficacy (i.e., patient-reported important outcomes) and safety outcomes between patients following robotic-assisted THA and those who received conventional THA. Conference abstracts were excluded. Search terms included indexed terms and free text terms relating to THA and robotic-assisted procedures. We adopted the Cochrane risk-of-bias tool and the GRADE approach to determine the risk of bias and the quality of evidence for included RCTs, respectively.

The sample size of each included RCT was small, and all of them investigated the ROBODOC robotic system.

In terms of risk of bias (RoB), none of the RCTs blinded participants and research personnel (Figure 1). Also, none of the included RCTs provided adequate information for us to determine the RoB in allocation concealment and selective reporting (Figure 1).

We conducted respective meta-analyses on 3 patient-reported important efficacy outcomes as well as 1 safety outcome, including the Harris hip score (HHS), the Merle D’Aubigne hip score, the Japanese Orthopedic Association (JOA) clinical score, and the incidence of adverse events. We also transferred the above patient-reported important efficacy outcomes to a normalized scale and pooled the outcomes.

The HHS is used to assess patients following THA. The score range of the HHS is between 0 and 100. A higher score indicates a better outcome.

As shown in Figure 2, there was no statistical significance in the differences of HHS at each point in time between patients who received robotic-assisted THA and those who did not.

The Merle D’Aubigne hip score (range: 0 - 100, a higher score indicates a better outcome) is a score used to evaluate the functional outcomes of patients following THA.

We found no significant differences in the Merle D’Aubigne hip score between patients following robotic-assisted THA and conventional THA (Figure 3). 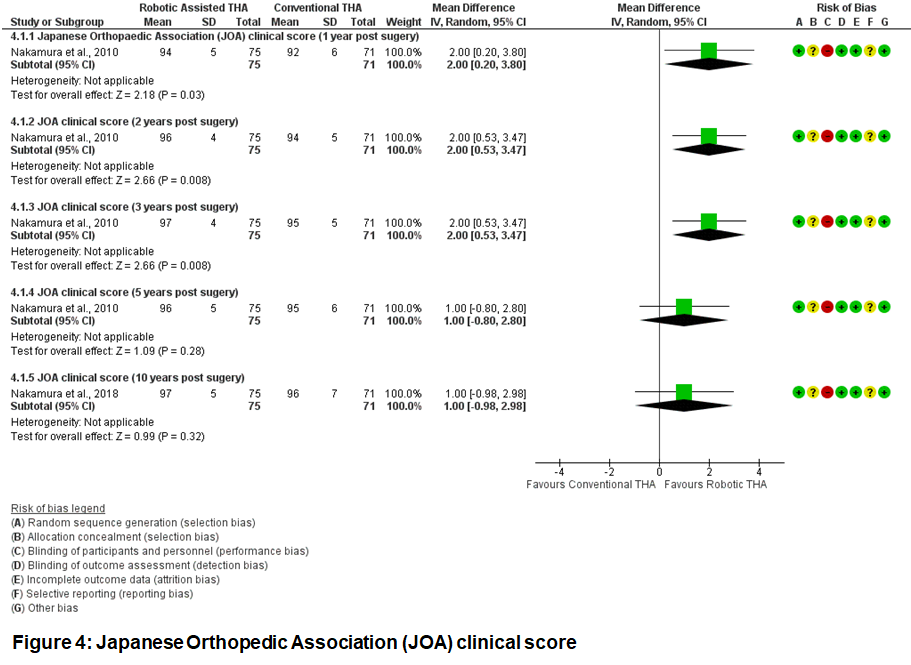 Incorporating the HHS, the Merle D’Aubigne hip score, and the JOA clinical score to a normalized scale (0 - 100, a higher score indicates a better outcome) at different follow-up durations, we found no significant differences between patients following robotic-assisted THA and those receiving conventional THA (Figure 5). 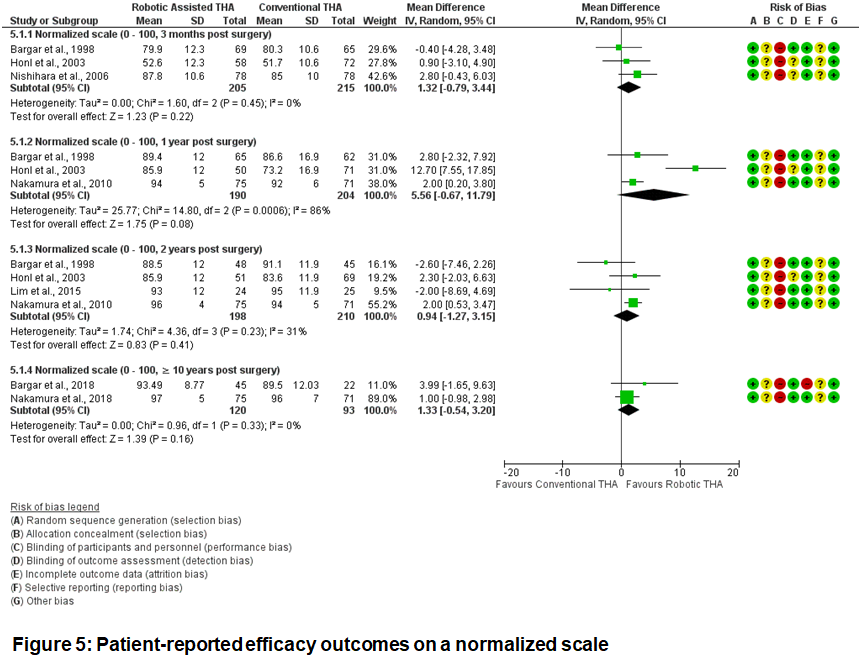 There were no significant differences in adverse events between the robotic-assisted THA and the conventional THA groups (Figure 6).

We also looked at the incidence of revision and reoperation which were reported by 4 included RCTs (Bargar et al., 2018; Honl et al., 2003; Nakamura et al., 2018; Nishihara et al., 2006). No revision occurred in either group in the studies conducted by Nakamura et al. (2018) and Nishihara et al. (2006), which therefore were not included in our meta-analysis. Pooling the results from the other 2 RCTs (Bargar et al., 2018; Honl et al., 2003), we found that there were no differences in the incidence of revision/reoperation events between the robotic-assisted and the conventional THA groups, but that there was a great inconsistency between results provided by Bargar et al., (2018) and Honl et al. (2003) (Figure 6). Hon et al. (2003) attributed its high incidence of revision/reoperation in the robotic group to insufficiency of the abductor muscles, which were injured or cut by the cutter during the procedure of robotic-milling.

In this OE Original, we carried out a systematic literature search, identified relevant individual RCTs, and conducted an up-to-date meta-analysis on patient-reported important efficacy outcomes and safety outcomes of robotic-assisted THA.

Based on the meta-analyses results, it seems that robotic-assisted THA might be as safe as conventional THA but not superior to conventional THA in terms of important patient-reported outcomes. Our meta-analysis corroborated the previous meta-analyses conducted by Chen et al. (2018) and Han et al. (2019), which included both RCTs and non-RCTs and found no differences in patient-reported important outcomes such as the HHS and the Merle D’Aubigne hip score. However, we must emphasize that evidence on each of the outcomes in our meta-analysis was of very low quality according to the GRADE approach, indicating that current evidence was insufficient and did not allow us to draw any conclusion on the efficacy or safety of robotic-assisted THA, as opposed to conventional THA.

One of the major concerns during the evidence quality assessment was the very serious RoB issue: none of the RCTs blinded participants or research personnel or provided adequate information on allocation concealment and selective reporting (Figure 1). Another major concern was the imprecision issue. Most outcomes in our meta-analysis were imprecise because their CIs crossed the no effect line and clinical decisions would differ if the upper boundary versus the lower boundary of the CIs represented the true effect. The CIs of JOA clinical scores at 1 year, 2 years, and 3 years post-surgery excluded the no effect line; however, imprecision still existed due to not meeting the optimal information size (OIS). Guyatt et al. (2011) proposed that imprecision may exist if the OIS threshold is not met, which is the total number of participants included in a meta-analysis is smaller than the number of participants generated by a conventional sample size calculation for a single trial with adequate statistical power. Moreover, as a rule-of-thumb, the precision of the summary estimate will be seriously compromised when the sample size is less than 400 for a continuous outcome in a meta-analysis (Guyatt et al., 2011). The number of participants in JOA clinical scores at 1 year, 2 years, and 3 years were only 146, far from 400. More RCTs with a high-quality methodological design and large sample size are needed.

To be noted, among all the robotic assistance systems currently available, all of the included RCTs identified in the literature investigated the ROBODOC surgical system. ROBODOC was first introduced in the 1990s and the first surgical system used in THA (Paul et al., 1992). ROBODOC, which is fully automated and only allows the surgeon to make an emergency stop once being active, prepares a canal for the cementless stem implantation with high precision by using its robotic arm to mill into the femoral neck (Perets et al., 2020). Another robotic assistance system widely used in current clinical practice is the MAKO Robotic Arm

Interactive Orthopedic System, which was first applied in THA in 2010 (Perets et al., 2020). Unlike the ROBODOC system, MAKO is a semi-active robot, meaning it is not fully automated.  Surgeons retain partial control over the MAKO robotic arm during the implantation based on

haptic feedback technology, which may provide “a ‘virtual safety barrier’ for the surgeon to prevent errors in component positioning” (Perets et al., 2020; Subramanian et al., 2019). The MAKO system is currently under investigation with promising results (Perets et al., 2018; Tsai et al., 2016), but no RCT results were identified by this meta-analysis. RCTs comparing the MAKO system vs conventional THA, or even vs the ROBODOC system are required.

The present up-to-date meta-analysis indicated that robotic-assisted THA might be as safe as conventional THA but not superior over conventional THA with regard to most of the patient-reported outcomes we meta-analyzed, such as the Harris hip score, the Merle D’Aubigne hip score, the Japanese Orthopedic Association (JOA) clinical score, and a normalized score incorporating the above scores. However, the very low quality of evidence, as a result of risk of bias and imprecision issues, suggested that current evidence was insufficient to permit any conclusion on neither efficacy nor safety of robotic-assisted THA. More RCTs with a high-quality methodological design and large sample size are warranted.