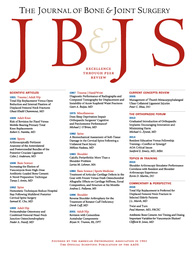 63 male patients (64 knees) undergoing total knee arthroplasty (TKA) were randomized to receive treatment using either patient-specific cutting blocks - derived from 3D preoperative CT images - or standard instrumentation. The purpose of this study was to compare these two approaches with respect to component alignment and short-term clinical outcomes. Results at 6 months indicated that there were no significant differences between groups in regards to clinical outcomes or tibial and femoral component alignment. The number of outliers with respect to sagittal tibial alignment/slope was significantly greater when patient-specific guides were used.

A current trend in total knee arthroplasty (TKA) research is the use of patient-specific cutting blocks for improving the alignment of components. In order to customize these guides, patients undergo either magnetic resonance imaging (MRI) or computer tomography (CT) scans preoperatively to produce an image of their knee, from which these individualized cutting blocks are made. The majority of studies looking at this technique have used two-dimensional radiographs as opposed to 3D CT data. This study was needed to compare clinical outcomes and component alignment in patients undergoing TKA with either patient-specific cutting blocks (from 3D CT imaging) or standard instrumentation.

In TKA, how does the use of patient-specific cutting blocks (derived from 3D preoperative CT images) compare to standard instrumentation (i.e. intramedullary femoral and external tibial cutting guides), with respect to clinical outcomes and component alignment, when assessed at 6 months?

In total knee arthroplasty, patient-specific guides were not associated with significant differences in surgical time, postoperative hematocrit, hospital stay, Knee Society Scores, range of motion, as well as tibial or femoral component alignment as compared with standard instrumentation. More cases where patient-specific guides were used had outliers in tibial slope.

The results from this study suggest that the use of patient-specific cutting blocks from preoperative 3D CT scans do not improve femoral and tibial component alignment, and malalignment in tibial slope was more frequently observed with their use. This is an important finding since preoperative CT scans are costly and create a delay before surgery can be performed. As a result, further evaluation of efficacy is warranted, and future studies should include a cost-effectiveness analysis comparing patient-specific guides and conventional instrumentation.