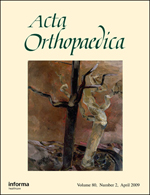 125 Norwegian patients, within a week of having acute wrist trauma requiring radiographic examination, were pseudo-randomized (based on the date of admission) to receive either early MRI treatment or standard treatment. The purpose of the study was to determine how early MRI compares with conventional management in treating suspected scaphoid fractures from a cost and efficacy perspective. Results indicated that the number of days absent from work and in a cast was significantly lower in the MRI group in patients without fractures, and no major difference was noted in the cost-minimization analysis.

Conventional treatment of occult scaphoid fractures involves wrist immobilization with radiographic reassessment 2 weeks later and studies have shown that 4/5 patients are immobilized unnecessarily. Acute MRI of the wrist has become a proficient method for ruling out injuries otherwise over treated and has been shown to reduce immobilization time in patients with suspected scaphoid fractures. However, no consensus was present at the time of this study about whether early MRI in suspected scaphoid fractures saves money as compared with conventional management. Thus the present study sought to determine the difference between the two treatments from an economic perspective in a Norwegian setting.

How does early MRI compare with traditional radiographs and conventional management in the treatment of clinically suspected scaphoid fractures, from a cost and efficacy standpoint, in Norwegian patients?

Study Characteristics -
Population:
125 patients aged 18-49 years, within a week of having an acute wrist trauma requiring radiographic examination were included in this study in Norway, from November 5, 2009 to November 4, 2010. Only patients with clinically suspected scaphoid fractures were included, with a clinical scaphoid score (CSS) equal to or greater than 3, with normal plain radiographs (124 completed follow-up).
Intervention:
MRI group: received acute MRI treatment as soon as possible after attending the clinic (Mean= 1 (0-7) days) and treatment according to MRI results at follow-up when results were available. The MRI protocol included 4 sequences and the scans were performed with a 1.5 T whole-body scanner with a wrist coil (n=61, Mean age= 29 (27-31), M=49%, F=51%).
Comparison:
Control group: received standard treatment with a below-elbow scaphoid cast for 2 weeks, after which a follow-up with repeated clinical examination, investigation, and treatment as with standard practice was performed. Radiography with extended wrist views and a series of 4 images including the distal part of the radius and the proximal part of the metacarpals was used (n=63, Mean age= 31 (29-33), M=60%, F=40%).
Outcomes:
Cost-minimization analysis (CMA) was used to estimate the cost of the 2 patient groups. Costs corresponded to expenses for social security, including healthcare provider costs and sick leave benefits combined with expenses for employers when employees are on sick leave. The time frame included both intended effects and unintended side effects. Direct and indirect costs were calculated and cost analysis was performed by comparing the cost of management of patients in the groups. The average cost of sick leave per day was calculated to be 242 euros, corresponding to an average daily income including tax of 14%.
Methods:
Prospective, single-centered, economic analysis, pseudo-randomized controlled trial.
Time:
Records at the department were reviewed 2 years after the inclusion of patients. Sick leave data was obtained from the start of the study until 6 months after inclusion.

The number of days in a cast and absence from work was significantly lower in the MRI group in patients without fractures. No major difference was noted in the cost-minimization analysis in terms of overall costs.

In a Norwegian setting, early MRI was useful in patients with clinically suspected scaphoid fracture and normal radiographs as it ruled out wrist fracture and decreased days in a cast and days on sick leave. However, the cost-minimization analysis found only marginal differences in overall costs between the groups. Further studies are warranted in other population subsets to determine the applicability of these results in the general population.