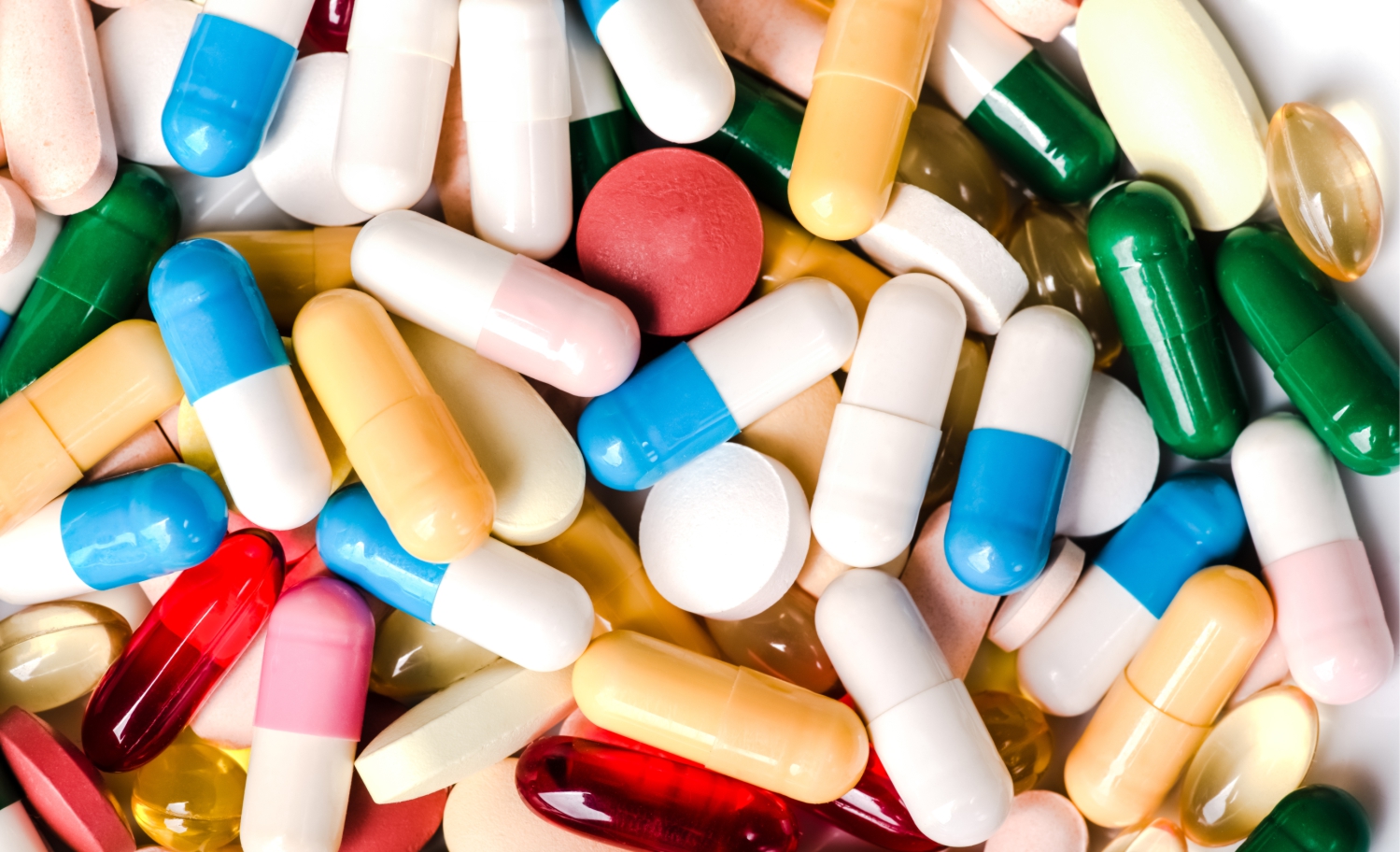 Colchicine for Knee Osteoarthritis: A Systematic Review and Meta-analysis

Colchicine for Knee Osteoarthritis: A Systematic Review and Meta-analysis

Osteoarthritis (OA) is considered “not simply a process of wear and tear but rather abnormal remodeling of joint tissues driven by a host of inflammatory mediators within the affected joint” (Loeser et al., 2012).

To date, the mechanisms related to OA initiation and progression, which are of extreme importance for the discovery and development of effective therapeutic treatments for OA, remain poorly understood (Chen et al., 2017).

For a long time, researchers have recognized the potential pathogenetic links between OA and gout, which is a systemic disease resulting from the deposition of uric acid crystals in tissues (Ragab et al., 2017; Roddy et al., 2012).

In a cohort of knee OA patients with no clinical evidence or self-report of gout, Denoble et al. (2011) found that synovial fluid uric acid was strongly associated with synovial fluid interleukin-18 (IL-18) and IL-1ß, which are usually produced during gout attacks via the activation of the nacht, leucine-rich repeat and pyrin domain containing protein 3 (NALP3) inflammasome (Martinon et al., 2006). In addition, the severity of knee OA, which was determined by radiograph and/or bone scintigraphy, was also positively associated with the levels of synovial fluid uric acid, IL-18, and IL-1ß (Denoble et al., 2011).

Colchicine, which is the first line therapy for the treatment of acute gout, has also been used in other diseases such as Behcet’s disease, coronary artery disease as well as other inflammatory and fibrotic conditions (Dalbeth et al., 2014; Leung et al., 2015).

In this OE Original, we conduct an up-to-date systematic review and meta-analysis to review and summarize the evidence from randomized controlled trials (RCTs) with respect to the efficacy and safety of colchicine for the treatment of patients with knee OA.

We adopted the Cochrane risk-of-bias tool and the GRADE approach to determine the risk of bias (RoB) and the quality of evidence for included RCTs, respectively. Two reviewers independently worked on the study screening and selection processes.

The RoB assessment was shown in Figure 1. One RCT did not blind participants by using placebo in the control group. A majority of the RCTs did not provide adequate information to determine whether outcome assessors were blinded or whether researchers selectively reported the outcomes. In the RCT conducted by Pandey et al. (2016) we found a number of reporting errors which could impact the accuracy of the outcomes of interest. As a result, we rated high risk of bias in the domain of “Other bias” for Pandey et al. (2016) and excluded the affected data from our meta-analysis.

All 7 included RCTs reported pain-related outcomes, including visual analogue scale (VAS) pain and The Western Ontario and McMaster Universities Arthritis Index (WOMAC) pain. We incorporated these pain outcomes to a normalized scale ranging from 0 to 100. A higher score indicates worse pain. To be noticed, we excluded the pain data provided by Pandey et al. (2016) due to the concern over the reporting errors in the study.

As shown in Figure 2, colchicine seemed to result in a greater pain reduction in patients with knee OA at 12 weeks, 16 weeks, and 20 to 24 weeks after treatment, compared to the control. However, the differences between groups were not statistically significant across all three time points. 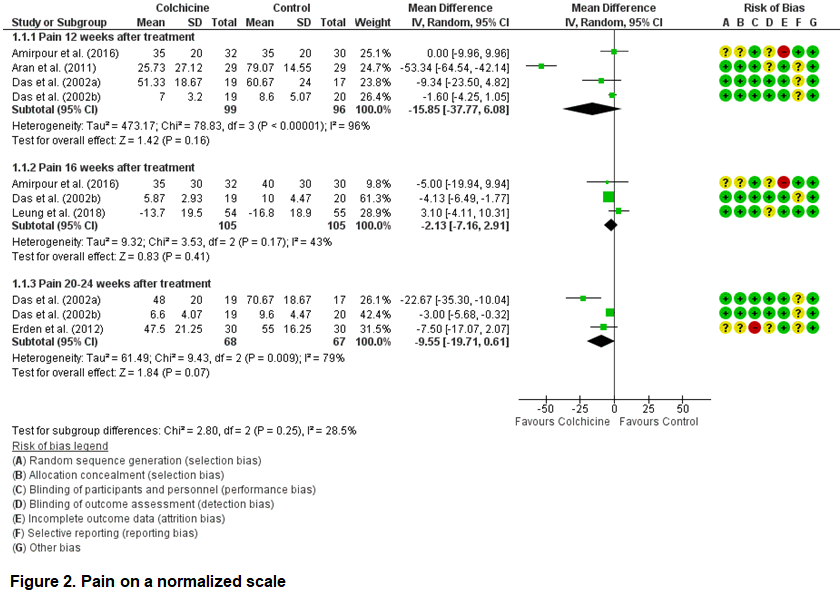 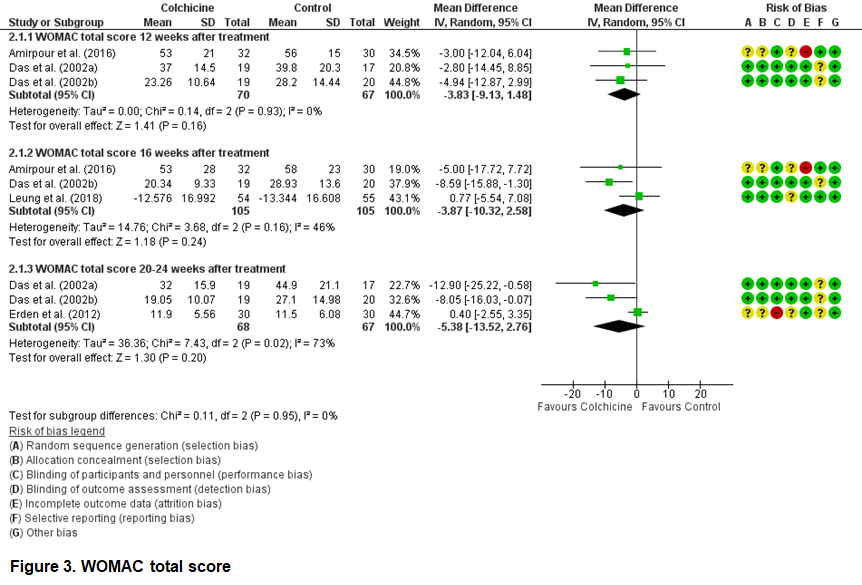 As shown in Figure 4, we found no significant difference in the occurrence of adverse events between the colchicine and control groups.

In this OE Original, we conducted a systematic review and meta-analysis to examine the RCT evidence with respect to the efficacy and safety of colchicine for the treatment of patients with knee OA. The summary of meta-analysis results and assessment of quality of evidence were shown in Table 2.

Overall, our quantitative synthesis results show no significant differences between colchicine and control in pain reduction (as determined by pain on a normalized scale, Figure 2) and function improvement (as determined by the WOMAC total score, Figure 3) at 12 weeks, 16 weeks, and 20 to 24 weeks after treatment among patients with knee OA. Colchicine also seems to be a safe treatment, as determined by incidence of adverse events (Figure 4), compared to the treatment used in the control groups, mostly placebo.

Our certainty about whether the current evidence reflects the true effects remains low or very low (Table 2). This indicates that the true effects might be substantially different from the estimates of effect generated from current evidence. Common concerns across the outcomes synthesized involve risk of bias which was described previously (Figure 1) as well as imprecision which is that the 95% confidence intervals (CIs) of all the outcomes synthesized were wide and crossed the no effect line. These concerns warrant future RCTs to be of rigorous methodological design and involve a large number of research participants.

Current evidence suggests that colchicine may be a safe treatment, but might not be effective in reducing pain and improving function for patients with knee OA. However, our certainty about this conclusion ranges from low to very low. More RCTs with high methodological quality and large sample size are warranted.

Amirpour, A., et al. (2016). The effect of colchicine in improving the symptoms of patients with knee osteoarthritis. Journal of Babol University of Medical Sciences, 18(11), 7-13.

Koyuncu, H., et al. (2013). The efficacy of colchicine with combination of cold on pain, swelling and function in treatment of knee osteoarthritis.